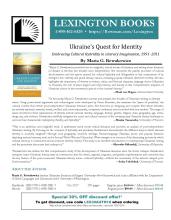 UKRAINE'S QUEST FOR IDENTITY: EMBRACING CULTURAL HYBRIDITY IN LITERARY IMAGINATION, 1991-2011 is the first study that looks at the literary process in post-independence Ukraine comprehensively and attempts to draw the connection between literary production and identity construction. In its quest for identity Ukraine has followed a path similar to other postcolonial societies, the main characteristics of which include a slow transition, hybridity, and identities negotiated on the center-periphery axis. Examining major works of literature produced in Ukraine during the first two decades after independence, this pioneering study situates the post-independence literary process within a grid of specific contexts, focusing especially on how regionalism, gender and language issues, as well as social marginalization and popular culture, are reflected in literary works following the collapse of the Soviet Union.