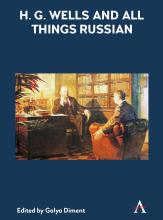 Byron W. and Alice L. Lockwood Professor in the Humanities, Galya Diment, has a new book coming out.  Titled H.G. Wells and All Things Russian, this compilation of essays is the first book to devote itself entirely to looking at how H.G. Wells influenced, and was influenced by, Russian literary and cultural life. The book also features translations by our own graduate student Veronica Muskheli (Ph.C., Slavic Languages & Literatures), as well as an article written by Richard Boyechko (Ph.C., Comparative Literature).  Published by Anthem Press, the book will be available later this month and is already being recognized as an important contribution to Russian literary studies!