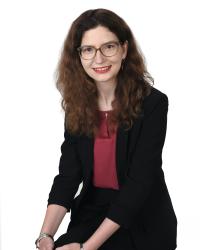 Justyna Zych is an Assistant Professor and Deputy Director at the Polonicum Centre of Polish Language and Culture for Foreigners, Department of Polish Studies, at the University of Warsaw. She teaches Polish culture and literature to foreigners, both in Polish and in English, as well as Polish as a foreign language. She also conducts lectures and workshops for future teachers of Polish language and culture at the postgraduate program, of which she is the head.

From 2014 to 2016, she was a Visiting Professor at the Department of Slavic Languages and Literatures at the University of Toronto. In 2020, she received the Fulbright Slavic Award and taught as a Visiting Assistant Professor at the University of Washington in Seattle. She also has delivered lectures at many universities worldwide, including universities in France, Belgium, Spain, Italy, Germany, Iceland, Great Britain, Hungary, Czech Republic, Russia, and South Korea.

Dr. Zych completed her Ph.D. in Literature at the University of Warsaw. She holds two Master’s degrees – in Polish Philology and in French Philology, both of which she completed within the Interdisciplinary Studies in Humanities Program. During her Master’s program, she studied for one semester at the Sorbonne Université in Paris. As a Ph.D. student, she received a research grant at the Université de Genève, Switzerland.

She has published a monograph L’Influence de la psychanalyse sur la critique littéraire en France (1914-1939) and numerous articles on contemporary Polish and French literature and on methodology of teaching culture. She also has edited two collective volumes on literature and is editor-in-chief of the publishing series Studia Glottodydaktyczne.

Dr. Zych is a member of the Team of Polish Language Abroad at the Polish Academy of Sciences, an expert of the Polish National Agency for Academic Exchange, and a chair of Polish as a foreign language exams, appointed by the Polish Ministry of Science and Higher Education.